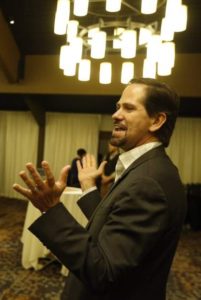 He likes to talk about leadership, hoping no one notices that his attacks include no solutions of his own. You see, for him, leadership is something other people do.

He’s like those old toys – pull the string, get a canned response.

With this most ambitious and widely predicted stage of his career, though, Knute is dropping his old fake “moderate” posturing and is going hard on the attack. Practically every other tweet is an attack on Kate Brown. Sound familiar?

What’s important is what you don’t see from Knute

You won’t find anything on the environment.

It’s just not a priority for him.

The last thing Knute tweeted even remotely about the environment before his latest attack was… another attack. That time, he was crassly blaming environmentalists for the forest fires that ravaged our state this summer.

You see, for him, environmental issues are only a convenient cudgel – either in a craven attempt to divide the electorate, as in his “us vs them” attack on environmentalists, or in yet another attack on Kate Brown as he sides with the Republican Party line.

Here in Deschutes County, we know Knute. He’s liked to play at being a moderate. Reality is different.

To be fair, he has been this side of 4am Trump crazy town a few times. That’s commendable, but nothing to depend on. He once took a commonsense approach to over-the-counter birth control and built a mythology around that.

It was later followed up with party line votes against pro-choice measures.

That pattern of appearing to be moderate only to later disappoint is a familiar one with Knute.

Nowadays, if you look more closely as he courts Republican primary voters, you’ll begin to notice he says one thing to the big media outlets in the valley and another thing to Republican-friendly audiences.

He’ll do anything to become governor. It’s been years in the making and he’s spent heaps of money towards it.

Don’t expect him to break from the party line – or big money donors – on the environment.

PS – Welcome to the campaign, Jonathan! Don’t bother adding platform statements now and pretending they were always there… we screenshot things.